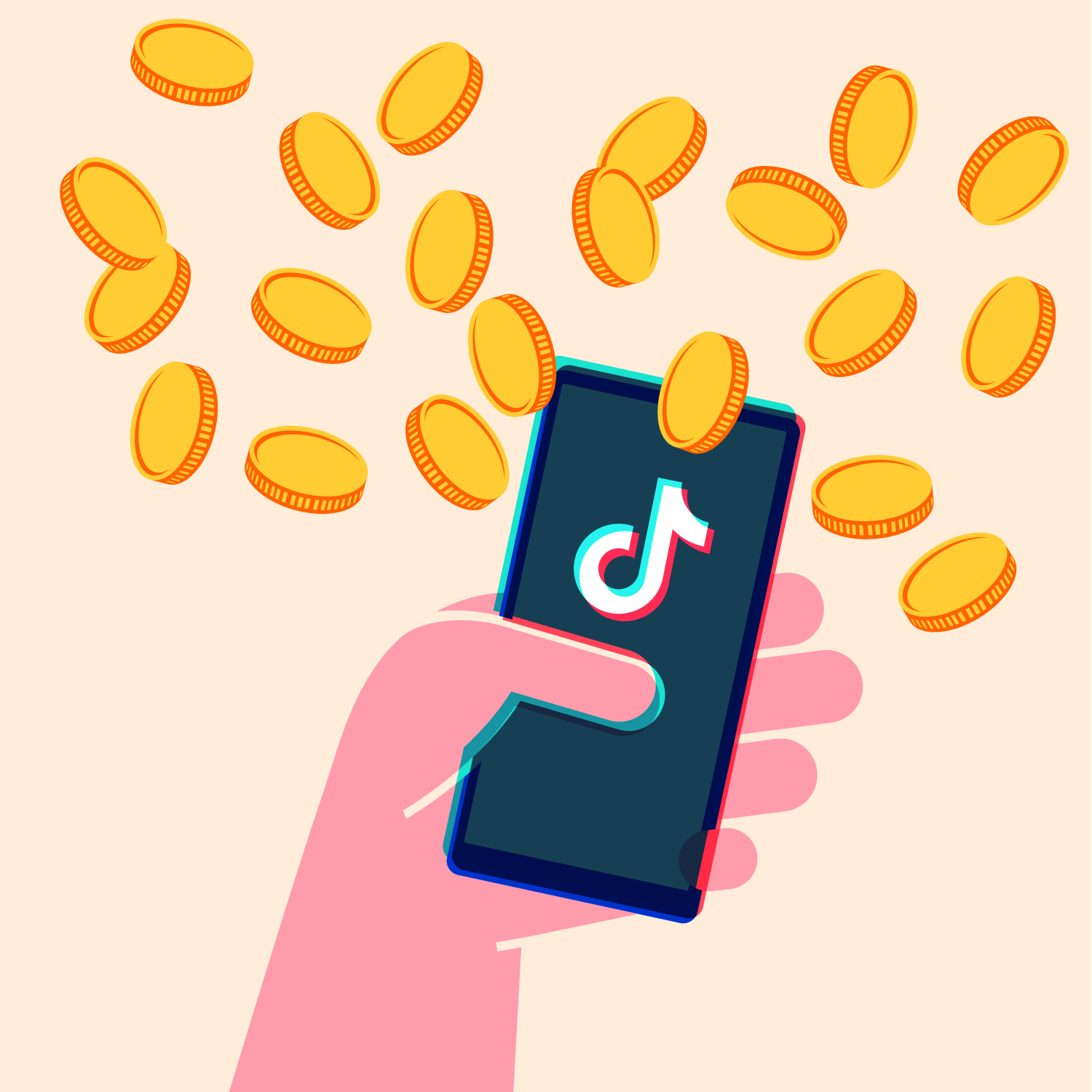 (illustration: iStock)
by Isabel B. Slone

When Courtney Croucher, 23, first stumbled upon “FinTok,” i.e. financial TikTok, she owed $40,000 in student loans and had no idea what her future held. It was May 2020 and she was living at her parents’ house in Cambridge, Ont., after graduating from media studies at Western University earlier that spring. Croucher watched all of her potential employment opportunities in her field dry up thanks to the pandemic.

Late at night, Croucher was scrolling through her TikTok feed when she landed on a video from @nobudgetbabe, an account with more than a million followers run by money coach Nicole Victoria. In the video, Victoria—who says she achieved millionaire status by age 30—described how people who have debt often spend money impulsively instead of successfully managing their finances. Becoming debt-free feels impossible to them, so saving seems futile. “I felt a little called out,” Croucher says.

At the time, Croucher was wasting money on impulse buys, like clothing she’d only wear once. She was so taken by Victoria’s story—a young woman who didn’t come from a wealthy family yet had managed to achieve financial independence—that she enrolled in her three-month online coaching program, Makin’ Money Moves.

The program inspired her to make changes in her life: Croucher picked up a side hustle delivering Amazon packages on top of her gigs as an assistant for a makeup company and a real estate agent and continued to save on rent by living at home. She also sold a chunk of her wardrobe and limited spending on things like alcohol and fast food. By early 2022, Croucher had paid off her student loan. She recently moved away from home to live in Vancouver—one of the most expensive cities in the country—with a cushion of savings. In fact, Croucher is such an evangelist of Victoria’s program that she now works for her as a client intake manager. Her goal is to retire at 40.

Croucher is far from the only person who has sought personal financial advice on social media platforms like TikTok. One-third of people say they trust social media content to help them make financial decisions, and about the same amount say they listen to celebrities or influencers’ money tips, according to a 2021 survey by U.S. investment firm TIAA. (About two per cent of Canadians even turn to their horoscope, according to a recent Scotiabank poll.) Nearly half of Canadians aged 18 to 34 use the internet for financial advice, government data shows. “The younger generations care much more about finance than they ever have,” says Iftikhar Mahmood, a certified financial planner in Markham, Ont.

With inflation on the rise and salaries that have not kept pace, it’s become incredibly clear that the traditional paths to achieving financial freedom—working hard at a salaried job, hoarding money in a savings account—no longer guarantee financial security. Gen Z, in particular, Mahmood says, have witnessed the struggle of their millennial counterparts—including being the butt of one too many avocado toast jokes—and are hoping to avoid a fate of being precariously employed and living paycheque to paycheque.

The trend of turning to online advice may be due to the fact that personal finance and investing are often daunting subjects, especially to people without formal education in these areas. According to the recent Scotiabank poll, 81 per cent of Canadians said the financial world is becoming more confusing and 70 per cent say they have “no clue” when it comes to emerging markets like cryptocurrency and NFTs. As a result, social media is brimming with tips for people who want to educate themselves and take control of their financial future. But is getting advice on finances from the same place that spawned a 48-hour sea shanty craze necessarily a good idea?

How to tell the good advice from the bad

When it comes to taking free advice online, it’s “buyer beware,” says Mahmood. People offering specific investment advice—think buying Bitcoin, for example—to a large audience without tailoring it to an individual’s needs is likely not to be trusted; there’s a good chance they may be involved in a “pump-and-dump” scheme. (A pump-and-dump scheme is when people promote a certain company to inflate its stock price, encouraging others to buy shares so its price climbs. Then, when the stock hits a high point, scammers will “dump” their shares leaving other investors with a lower-valued stock.) “Unless you know a lot about something, don’t assume it’s going to yield a great result,” Mahmood says. “Financial solutions aren’t one-size-fits-all.”

But when it comes to more general and behavioural tips and advice, like how to better save money each month or the importance of an emergency fund, social media can be useful—if information is coming from a credible source. Anyone can bill themselves as a “financial expert” or “money coach,” so check to see if someone has a recognized title, like certified financial planner. Most legitimate advisors list their credentials clearly on their websites or social media bios.

Victoria, the 31-year-old money guru who helped Croucher turn around her finances, is very careful to point out that what she offers on TikTok is financial education—not financial advice. Instead of telling people where they should put their money, she focuses on communicating basic principles of personal finance. “I hate when I see people who are like, ‘Buy this stock, it’s going to the moon.’ It’s like gambling,” she says. “Anybody who tells you that you are going to get rich overnight is lying to you.”

Be wary of betting big

The siren call of a significant windfall can be difficult to resist. Colin*, who asked to use a pseudonym because he doesn’t want his mom reading this, is a graphic designer who has been investing in crypto for five years. The 32-year-old made over $35,000 investing in Bitcoin, Decentraland and Litecoin by the beginning of 2020. In 2021, he learned from his sister’s similarly crypto-crazy co-worker about an obscure coin called Loopring. Colin began reading about Loopring on Reddit forums and picked up on murmurs that the currency would soon announce a partnership with GameStop that would send its valuation skyrocketing. “I decided to go along for the ride,” he says.

Colin converted a total of $20,000 of his other crypto assets into Loopring in December 2021, but the gains he hoped for didn’t materialize. “It’s been a slow bleed since then,” he says. (Since its height of about US $3.37 in November 2021, Loopring is now valued around US $0.54.) “With hindsight, you can say ‘I shouldn’t have done that,’ but I don’t regret my investment because it could have easily gone up four to five times,” he says. As with any kind of investing, “You’ve got to be prepared to lose that amount.”

According to Mahmood, when markets are strong, there is a huge proliferation of investment advice from people who aren’t trained. This is because in bull markets when people experience big gains, they feel qualified to give out advice. But when we experience a crash or shaky market, many “finfluencers” aren’t equipped to cope. “People on TikTok may not know how to manage money through a volatile and risky period,” he says. “It’s dangerous, because when the bubble bursts, the people who lose their shirt are the ones who didn’t really know what they were doing in the first place and shouldn’t have been investing in riskier stocks.”

Despite the risks, there’s an obvious benefit to making financial information more widely accessible. The financial sector remains male-dominated, and the new cohort of influencers are providing much-needed representation of women and people of colour. In spite of the more confounding aspects of the market, the internet empowers people to learn how to make sense of their own financial decisions.

And when you get the right advice, it helps. Croucher recalls meeting with a financial advisor at 19, when she wanted to learn more about investing, and felt confused by the jargon they were using; it was like the planner was gatekeeping information from her. “I remember leaving the meeting feeling so defeated,” she says. “Rather than teach you to invest, it feels like they want to do it all for you.” Without TikTok, Croucher says she would probably still be paying off her student loans.