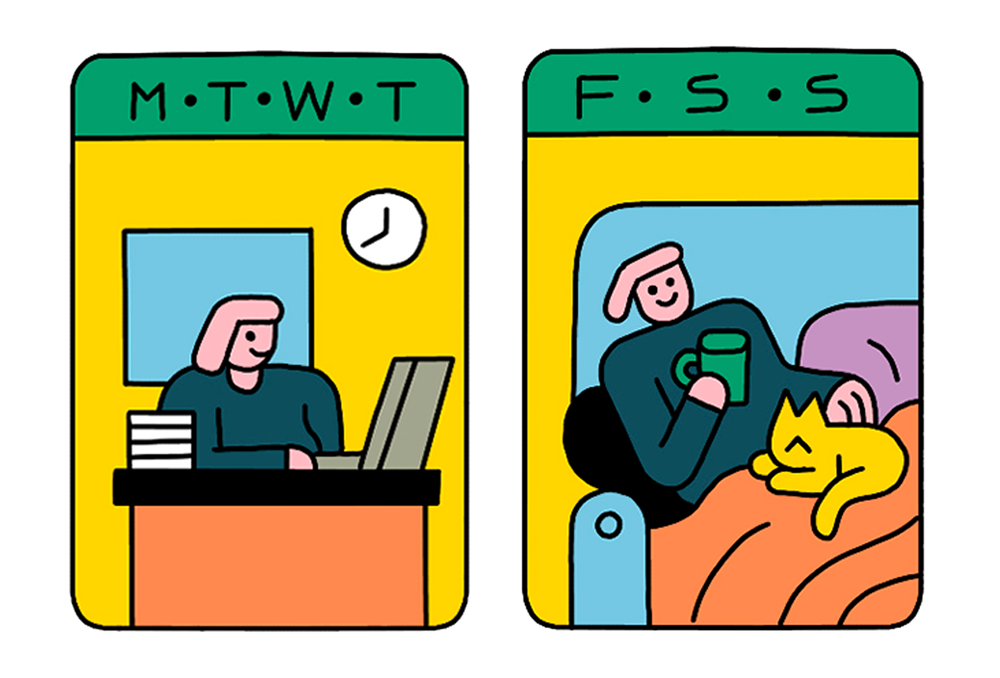 Illustration by Cristina Spanò
by Isabel B. Slone

Box of Crayons, a small company with 17 employees scattered across Canada, helps other businesses create connected workplace cultures. The company has been remote-first since its inception in 2002. It prioritizes results over hours, offering unlimited vacation and freeing employees from the nine-to-five schedule. And yet even with its flexible work culture, Box of Crayons could not avoid the burnout that swept across the world during the pandemic.

In the first half of 2020, many employees were feeling stretched past the breaking point. Parents were especially overwhelmed and often expressed frustration at their inability to properly tackle their workloads due to childcare obligations. Others shared stories about their declining mental health during meetings. By the end of 2020, pandemic burnout had taken its toll and the collective brain fog was starting to feel permanent.

According to a survey by LifeWorks, 81 per cent of Canadian workers reported that the pandemic has negatively affected their mental health. In January 2021, when Ontario entered its third lockdown, the stress seriously began to affect the Box of Crayons staff’s productivity. Kimiko Mainprize, the company’s VP of people and culture, noticed during meetings that people were being pulled in different directions. Many weren’t replying to urgent work emails until late in the evening. Management realized that in order to take the pressure off, they needed to structure some rest into their workweek.

And so the company launched a two-month trial of a four-day workweek, giving its staff Fridays off. It seemed like a simple solution to an urgent problem. At first, Mainprize had to reassure employees that there was no hidden catch: They really didn’t have to be at their desk or respond to emails at any point during the day. And the change had the desired effect. When all employees had the same day off, they felt more comfortable disconnecting from work.

At the start of the trial, Box of Crayons’ leadership team had a strategy session to streamline the work process with the goal of eliminating superfluous meetings and ensuring work could be done more asynchronously. For the meetings that remained, they figured out ways to make them more efficient: They’d get staff to brainstorm and prepare memos ahead of time so the meeting itself would be more productive. They also cut back on how often they shared information and reported on projects. As Mainprize says, “The focus was: What is the simplest way we can share things and what is the least amount of information people need to know? It’s something we’re continuing to evolve.” Immediately, employees began to prioritize the tasks they deemed most important to finish within their now limited time. This allowed them to do away with less essential projects that were using up valuable hours and brain space. The company was so delighted with the results that they decided to extend the trial indefinitely, switching permanently to a four-day workweek in May 2021.

Once the reduced workweek took permanent effect, the company had to figure out how to calculate vacation allotments for the modified hours and how the decision affected insurable hours. They also reassessed projects with deadlines that had been mapped out prior to the change. And everyone put their working hours in their email signatures so clients would know about their new schedule. A survey conducted six months in showed great improvements in employee satisfaction. Mainprize says that productivity-wise, the company is moving steadily back to pre-pandemic levels and the renewed clarity has helped employees better decide how to spend their time.

According to Mainprize, the long weekends help take the edge off, especially during a pandemic. “I feel like my brain is clearer,” she says, “and I’m ready to dig into any challenges that come my way.”